10 Reasons To Come To Forge

1. Space! We have loads of it! Our school has tonnes of grass to play on when it’s dry, and the grass is also useful for sports. In the past few years we’ve had football, rugby, netball, basketball and gaelic football coaches in. 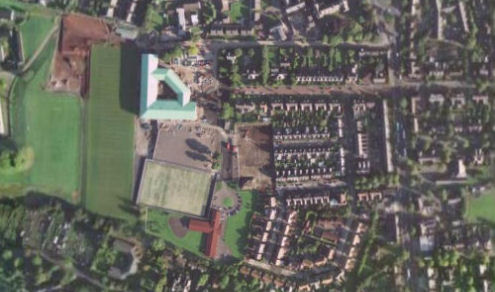 2. A friendly atmosphere. Visitors to our school always notice how welcome they are made to feel. It’s more than just the smell of toast coming from the staff room, it’s because Forge is a community, and everybody works together. Forge has always believed in having an open door policy for parents; staff are available for a few minutes in the morning, and after school, and Mr Watson's door is (almost) always open!

3. The Pupils' Council. Two children (a boy and a girl) are elected from each class (P3-P7) to be representatives on the Pupils' Council each year. Obviously there are limits to what the council can do (a theme park in the playground is unlikely), but they are there to put forward pupils' ideas about what would make Forge better, and to comment on any changes. For example, the council have organised 2 sponsored walks so far and are currently discussing how the school garden should be designed.

4. Clubs! We finish the week with clubs between 2 o’clock and 3 o’clock on Fridays. This year cycling, football, computers, netball, recorder, hockey chess and a book club are all on offer.

5. The P.T.A.! We have a very active P.T.A. who organise all sorts of events throughout the year, the Christmas fair, for example, and a variety of other events from Duck Derbies to Pub Quizzes. If you haven't been there already, check out the P.T.A. section to see pics of recent events!

6. Interactive whiteboards! Although our interactive whiteboards aren't quite brand new any more, they have completely changed teaching in Forge. A day's work can be saved for another time, images can be presented more clearly, such as the pictures in Miss Agnew's lesson below, or Google Earth for example. There are also other interactive sites such as learning.ni and bbc.co.uk that are used regularly. The software that comes with the boards can do all sorts of things - roll dice, measure angles, make up fractions, plot graphs, add sounds to pictures and text and much, much more... Best of all though, the height of the boards can be easily changed so that children of all ages can have a go! 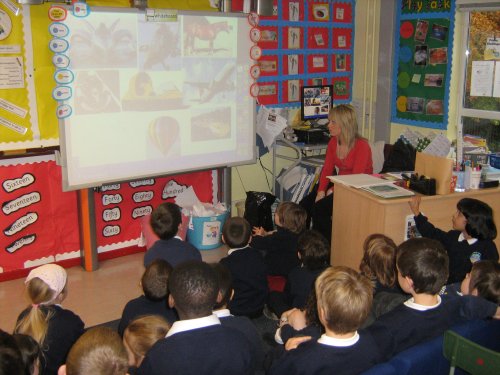 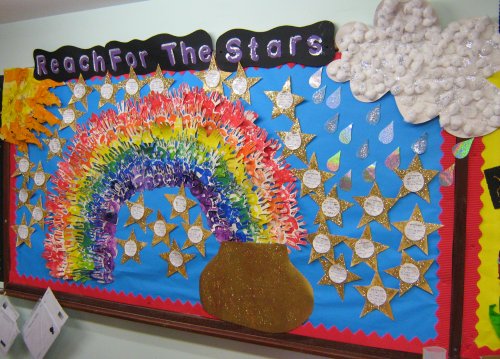 8. Fun! We definitely believe in having fun. Not everything you have to learn in class can be fun, sometimes it’s just stuff you need to know, but we do try very hard to make lessons as interesting as possible. It's also important that Forge pupils achieve as much as they are able to, and so a lot of class time is spent discussing what is being learnt and evaluating whether that has happened. Above, P2's 'Reach for the Stars' board was made by lots of handprints put together to form a rainbow, while the stars all have "I am learning to..." sentences made up by each P2.

9. The School Choir. The Forge Choir keeps getting bigger and bigger, and that might be a lot to do with the amount of fun they have. The girls and BOYS of the choir perform several times during the year, particularly at Christmas, the year end and sometimes at other special occasions too. Mrs Reiman and Mrs Gowan take the choir each Tuesday afternoon afternoon, and they are pretty cool choir leaders (but nobody should tell them that in case they get big-headed...)

10. This web site. The site is now in its sixth year and while it was created to let people know where we are and what we do, it has changed a lot. It's a great way to celebrate achievement in school and display pupils' work. The site is also a great way for parents and other friends to see what's going on week by week, it's important for everyone to share in the life of the school. If you haven't been there already, check out 'The Biz' for what's been happening lately.